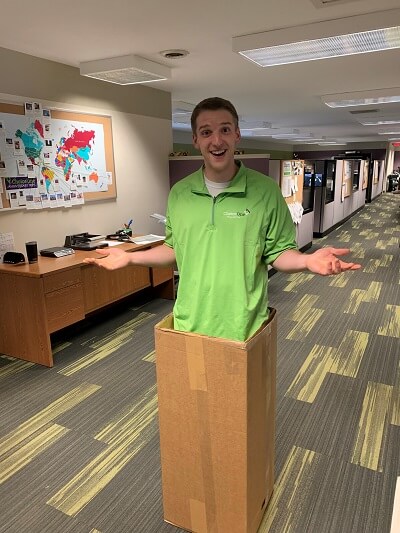 New employee Michael* Kunzi, or just “Kunzi” as we call him, was tricked into helping move a box that Megan was hiding in. And as stated, he saw a shared photo of Megan getting into the box, knew Megan was waiting in the box to surprise him, and STILL came lickety-split to help move said box when summoned.

No, you’re not dumb, Kunzi, we’re just clever jokesters (at least for engineers). Be careful, you never know when we’ll get you. Sometimes the practical jokes are as simple as our recent attempt to surprise the UPS guy. Others become much more elaborate, however, like sending a $250 invoice to the Ohio Governor’s Office (which Kaye still claims was an accident, not a practical joke).

Keep being willing and helpful Kunzi, and we promise you’ll be rewarded (someday) with more than embarrassment. Plus, since you’re new here, we’ll cut you a break: this is your slightly overdue warning that we may have a practical joke or two up our sleeves (though sadly not in our pockets).

*Yes, we have another Michael to deal with—meaning that 8% of our employees are now named Michael.