11 Nov Out of Pocket

Tony Schroeder:
“I’m gone two weeks and you guys get rid of pockets.” 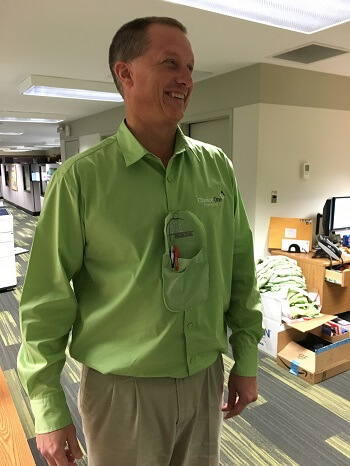 An engineer without a place to carry a pen at all times is a lost soul indeed. While Tony was out of the office, likely on a bicycle somewhere in Florida, our newly-logoed men’s shirts were unintentionally ordered without one [apparently] crucial feature: a chest pocket.

While this missing pocket is seemingly disastrous to many of our engineers who “need” said pocket to store their prized blue-only ink pens and giant red Sharpies, there are a couple of advantages of eliminating this storage feature from our attire:

In the meantime, to keep his writing utensils close at hand, Jeff has creatively buttoned an old pocket to his new shirt. In our opinion, this act bears a significant resemblance (in more ways than one) to Winnie the Pooh’s Eeyore pinning on his tail. Whether the resemblance is predominately due to the pinning action or because Eeyore is a… donkey… will remain unspoken.