Allan Heitbrink:
“This is really the only way I’ll ever have a beard.” 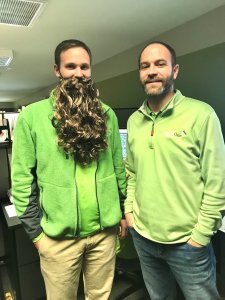 It may look like engineer Allan Heitbrink is easily beating surveyor Wes Goubeaux in a beard growing contest, but, believe it or not, Allan’s beard is fake! You had no idea, right?

Beards have come up a lot lately here at Choice One thanks to the upcoming lumberjack-themed Sidney Charity Cup (March 27!) that includes, among other ridiculousness, a beard growing contest. Some here, like Wes, are working on the real thing, while others, like Allan, are looking for ways to make facial hair happen.  While Allan is very good at some things, like highway lighting, traffic engineering, and ignoring Matt and Mitch, he admittedly says he’s never been “skilled” at beard growth. Try harder, Allan.

Have a cool beard (real or fake)? Want to have fun? Come to the Sidney Charity Cup—no RSVP needed! We promise you won’t go hungry, thirsty, or be lacking in beard-inspired entertainment. (And we’ll do the same for the Loveland Charity Cup this upcoming November, although we’re pretty sure we know who might win that beard growing contest…)