Jeff Kunk: “Doughnuts up front for the Sidney folks.”
Kyle Siegrist: “Who would have thought the world would end on such a high note?” 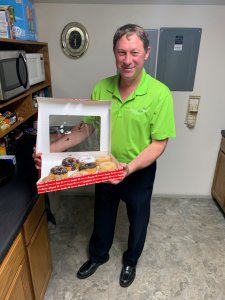 Are you sitting down? If not, you might want to. Right now, before you read this next sentence. Jeff Kunk bought doughnuts. We know, we’re starting to look for signs of the apocalypse too (it did just snow a couple of inches this late April week in west-central Ohio, so…).

The occasion? Jeff won a Master’s Golf Tournament pool we had running at our offices. (You’ve heard us lament about the woes of winning things around here.) Jeff could have snuck away with his winnings, but instead, after 27 years of avoidance, he ponied up and treated both Loveland and Sidney to some freshly made pastry treats.

You’re probably wondering if these Mindsets will cease now that our overly-redundant story thread has been resolved. Fear not—we have something new to tease Jeff about for the next 27 years: he only bought two dozen doughnuts for 40 people in the Sidney office, so a good 15 didn’t get a doughnut. Keep trying, Jeff—we’ll cut you some slack someday.