While the Cat’s Away…

Tony Schroeder:
“Thanks for allowing me to go on this trip; for a president to take this much time off, you have to have a great staff, or the president doesn’t do much. I will go with a good staff… makes me feel better.” 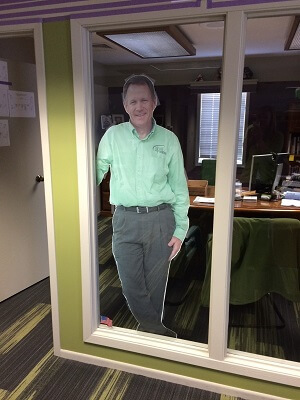 He’s at it again! Remember 2010’s Tony Chasing Wade, when our company president Tony and his son Wade biked across the U.S.? Now Tony and his wife Joan are bicycling down the east coast of Florida for the next several weeks. You can follow him from Jacksonville to Key West at Tony Transporting Joan.

For each five years of service, Choice One employees receive a vacation to any place of their choosing as an anniversary award. For instance, for his 10-year award, Greg Albers and his wife Jamie spent a week touring San Francisco. Ryan Francis took his wife to an all-inclusive resort in Mexico for his 10-year award. And Tony? For his 20-year “reward,” he’s going to bike 60 miles a day. He might as well have chosen to watch soccer for three straight weeks.

No worries, as Tony indicated, we’ve got things covered while he and Joan are pedaling through the Sunshine State. Heck, in reality, that cardboard cutout of Tony is probably more useful than the real deal. Nonetheless, if for some crazy reason you’re looking for him (like Tom Coverstone and Jessica Minesinger STILL are) Tony will return in a few weeks!