Megan Bornhorst:
“Goub, you could measure the driveway in cartwheels.”
Brian Goubeaux:
“Nah, I think Caray does that better.” 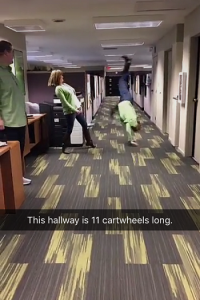 When Brian “Goub” Goubeaux almost forgot his tape measure, Megan suggested a resourceful measurement technique. Because, if you weren’t aware, the main hallway at Choice One’s Sidney office is 11 cartwheels long, according to our Controller Caray Schmiesing. Now, 11 cartwheels in a row is quite a feat for any person (Kaye can’t even do a somersault). But to add a little perspective, Caray played basketball before there was a three-point line for girls. Therefore, her 11 cartwheels in a row is feat of impressive talent and grace.

The long, runway-like hallway at Choice One is an exceptional place. It’s where Megan holds her three o’clock dance parties (more on that in Mindsets and social media posts to come). We’ve held three-legged races and indoor bowling competitions down it during company parties. And Choice One visitors under the age of six can’t help but run up and down it at top speed (as well as top “stomp” and top “scream”).

Now that the hallway has been “officially” measured, plotting distances in cartwheels might be a new standard at Choice One. Perhaps the next time we design your water main or sewer line, it will be labeled in C.W. (cartwheels) rather than L.F. (linear feet). Hopefully Caray can perform more than 11 cartwheels in a row, because we’re guessing when Goub needs to measure and design several thousand feet of pipe, he may need just a few more cartwheels.