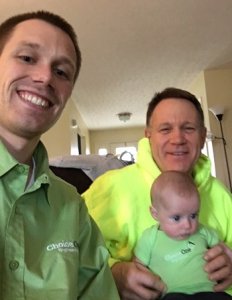 Last week, Tony had scheduled both a Choice One meeting and Very Important Grandpa Duties at the same time. So Matt staged the meeting with both Tony and his grandson Luke. Indeed, Luke might as well get in on the Choice One action now–heck, at three months old, he’s already in a custom-made Choice One onesie.

Comparably, our youngest full-time employee Lexy was born in 1996, two years after Choice One was founded. So, if you can imagine, she could have been an infant sitting in on a meeting with Tony, Jeff Puthoff, and the other old guys back in the “Batcave”. Kaye would have been in Junior High, getting her braces checked by her orthodontist one floor down in the same building as Choice One’s first Sidney office (and boy did she need braces). And Matt was likely nerding it up at nine-years-old, writing complicated formulas (about Nintendo games or something) on paper since he didn’t have MS Excel yet.

Luke may not choose to work at Choice One someday, but regardless of his future career, he has been born into Choice One family and is stuck with the curse of “Gang Green.” Poor kid—at least the rest of us can say we chose it!