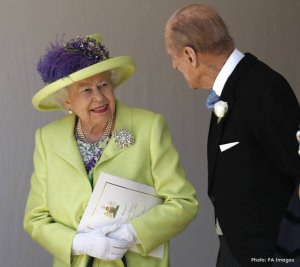 If you got up early last Saturday to watch the Royal Wedding coverage at 4:30am (which is still probably later than Jeff Puthoff got up), you may have noticed, Like Jeff Stewart did, that a certain high-ranking wedding guest “borrowed” Choice One’s color scheme on an international stage. Talk about a royal scandal!

Although we lack scandals at Choice One, we do have some royalty. Kaye Borchers has been referred to as the “Survey Princess.” Michael Seeger was once the Shelby County Fair King. Brittany Clinehens was the Anna Homecoming Festival’s Queen. And, how could we forget that Matt Hoying is a royal pain in the…neck?

We can’t blame the Queen of England for choosing such a stylish color combination—we’re rather partial to it, of course. Perhaps we can even take a page from Her Majesty’s book and add a few more jewels and feathers to Choice One’s wardrobe (or at least encourage Michael and Brittany to wear their crowns on a daily basis). If nothing else, bling like Queen E.’s could cover up the place where Jeff’s sorely missed pockets used to be.