Megan Bornhorst:
“Congrats on the engagement, Casey! Will this be the first time we change someone’s initials here?”
Jeff Puthoff:
“No. We changed Nick Selhorst’s when he married Choice One.” 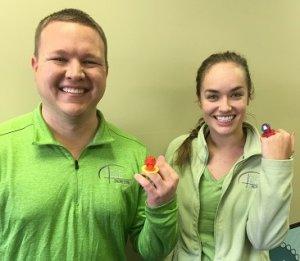 Backstory: everything we do at Choice One involves our initials, from official email addresses to hand-jotted notes. Using our unique initials is so commonplace we often refer to each other as AJB, CCE, WDG, and so on. Then, four years ago, the unthinkable happened. Two people had the same initials: Nicholas Jerome Sanders and Nicholas John Selhorst. Since Nick Sanders was already established as our official “NJS,” the newly employed Nick Selhorst became NNS, short for “Not Nick Sanders.”

Indeed, some clients actually call in and ask for “Not Nick” on a regular basis. And we’re pretty sure that’s ok with NNS, as he often refers to himself as “Not Nick” as well. Because let’s be real–being mistaken as Nick Sanders would mean endless hours of listening to Kenny Rogers.

Soon, the newly engaged Casey Heitkamp (CCH) will become Casey Reichert. And at Not Nick’s request, in honor of Casey’s engagement, we will be listening to Creedence Clearwater Revival (you know, CCR) all day at Choice One. Sorry Nick Sanders, it’s not a Kenny Rogers day.

Congrats Casey. Your bridesmaids will be wearing purple and green, right?