Megan Bornhorst:
“I ❤ MJH *Try really hard not to punch him.” 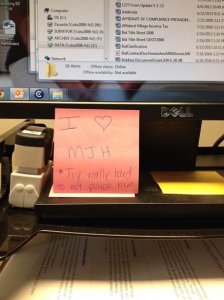 Megan once used this physical note to reminder herself that “MJH” (Matt Hoying) is still loveable, even when teases her about things like using paper to go paperless. Hey, sometimes it takes a reminder to break habits.

Our Post-Its definitely indicate our priorities around here. And we would argue that many are truly essential—like Jonathan Whitesell’s: “Make sure you laugh at Jeff Puthoff’s jokes. They probably won’t be funny, but it will make him happy!” Reminders break habits, indeed!