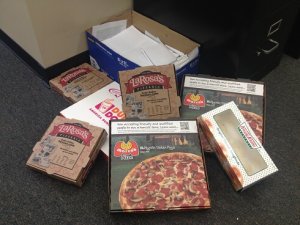 Hmmm, based on a recent pile of boxes to recycle, the Loveland office has had plenty of tasty food for the Sidney office to be jealous of over the past few weeks. Still, Brian makes a good point–there are no Arby’s wrappers in that pile, and Arby’s IS awfully tasty…

Despite the lack of snacks from Arby’s and the 90-mile distance between our Sidney and Loveland offices, we aim to make the atmosphere as similar as possible. For instance, now that the first coffee addict (Nick Selhorst) is in the Loveland office, we have installed a coffee machine in Loveland similar to the one in Sidney. One can assume that Nick will have the new one hooked up in about 30 seconds, unlike Tony’s crazy coffee machine debacle last spring. Another example is Brian Schmidt, who calls Brittany every few days to read her the “You Might Be a Redneck…” daily calendar he keeps in Loveland. (“You own more cowboy boots than sneakers,” and “It’s easier to spray weed killer on your lawn than mow it” have hit a little too close to home recently.)

These efforts to maintain similarity at our offices is important because it keeps us all on the same team. Even though the offices are about an hour and a half apart, we hope the physical distance doesn’t deter the camaraderie (i.e. laughter and tomfoolery) that we enjoy in both offices.

FYI, most Arby’s restaurants will “cater” for your next organized event if you call ahead. Think of hot roast beef by the pound, fresh buns, and a huge order of perfectly-seasoned curly fries with cheese. When Schmidty reads this Choice Mindset, we can imagine Schmidty will be jealously hungry just thinking of Arby’s sandwiches. Brian, shall we assume that the Arby’s on Loveland-Madeira Road is about to sell one more sandwich?

P.S. Apparently, as soon as Nick plugged in the new coffeemaker in Loveland, there was a power surge in all of their electrical outlets. Tony must have cursed that machine, too.