Have It Your Way

Loveland Burger King Cashier:
“Do the rest of your guys know you’re coming here without them?” 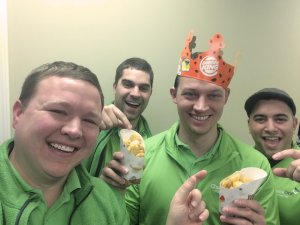 Our Loveland Choice One crew often hits up the local Burger King for lunch together. But once, when Brian Schmidt went alone, the cashier noticed and wanted to make sure Brian wasn’t sneaking Whoppers without his green-shirted cohorts. Not so says Brian! We’re very thankful for our Choice One family (and for Burger King, clearly), and in the spirit of Thanksgiving, we thought we could recap a couple of current Choice One blessings:

In closing, we think it’s safe to say there’s no shortage of turkeys at Choice One. And even though it’s a day late, Happy Thanksgiving from Choice One Engineering!

P.S. If you want something else to be thankful for, here’s a new video starring Choice One in which we’re NOT dancing at all.