“What happened to the Canteen?! It’s like a grocery store before a blizzard.”
-Greg Albers 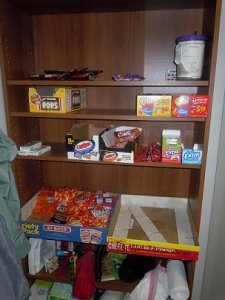 You know how it is: the weatherperson reports that a “blizzard” (read: two to four inches of snow) is coming, and everyone rushes out for groceries in a panic in case they can’t get out of the driveway for three days. The last to the store might find that all the staples–bread, milk… beer–are gone, and that poor sap is left to choose between a questionable jar of pickled eggs and a dusty case of Milwaukee’s Best Light (unsurprisingly, one of Tony’s favorite beers, not because of taste, but because of frugality).
Brian Barhorst operates the Canteen here at Choice One, an honor system “vending machine” that gets a little barren occasionally. Since we all know that Brian hikes Canteen pricing up for profits to fund personal trips to tropical places, we know he’s not unprepared (for fear that he might lose a sale to the gas station down the road). He just hasn’t been to Sam’s Club in a while.
Being prepared for every outcome is impossible (and exhausting), so at Choice One we try to act as a Boy Scout would, and pack our pocket knife and matches: responsiveness, a sensible, realistic outlook, and lessons from past experiences.
Now, if only that Canteen was stocked with some of that dusty Milwaukee’s Best Light today so that Tony wouldn’t have to drive down to the local carryout.