Kaye Borchers:
“I think this guy is asking for an autograph. Craig’s an ODOT legend.” 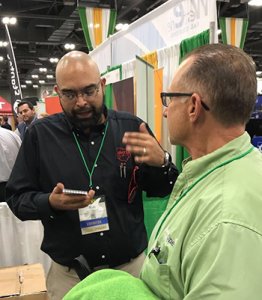 When he attends the Ohio Transportation Engineering Conference (OTEC), Choice One traffic engineer Craig Eley is quite the celebrity. With 25+ years’ traffic engineering experience with ODOT and now at Choice One, it’s no wonder he knows pretty much every person in the room, not to mention every piece of traffic control gadgetry in the exhibit hall. (Nerd alert!)

We have a few other “celebrities” at Choice One. Our survey crews are occasionally caught on Google Earth Street View. Megan Bornhorst once appeared on the gameshow Let’s Make a Deal. She won $450 and a home gym (which she admits she has used a total of five times in six years). And Mitch Thobe once appeared in ESPN stock footage as the typical disgruntled Cleveland Browns fan on the network’s Around the Horn talk show.

While being renowned celebrities sounds fun, it’s not all meet-and-greets and parting gifts. Megan has to dust that home gym. Mitch had to adopt a life as a Browns fan to become famous. And for Craig, trying to get anywhere at a traffic conference is impossible—he’s endlessly stopped to swap roundabout tips and snap selfies. Which means if you’re traveling with him at OTEC, you are probably going to miss out on the nacho bar in the exhibit hall.